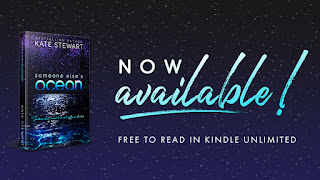 We’re celebrating the release of  SOMEONE ELSE’S OCEAN by Kate Stewart! One-Click today!!! 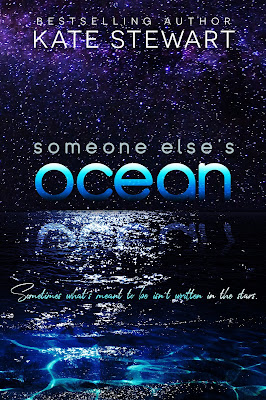 The first time I met Ian Kemp in the sparkling blue waters of St. Thomas, I was six years old and we shared a summer beneath the stars.
The second time I met Ian Kemp, he was a shell of the boy I once knew. Turbulent and infuriating, he refused my friendship at every turn. Like me, he was a casualty of life’s cruelty, but we were planets apart.
We’d both sought refuge on the island, hoping to find our anchor. Instead, we found each other and managed to reclaim our stars…until we both got swept away. 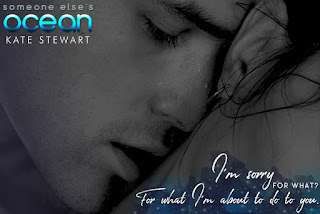 A beautiful love story is too simple a term to describe this book. There is a depth and complexity to these characters and a running theme of human kindness and responsibility we have for each other that ties this romance all together.

“…we are all just extra’s sipping coffee in the background of someone else’s life. But that could change at any second. If I wanted to, I could put my coffee down and become responsible for you… We could all choose to take responsibility, couldn’t we?”

Ian is recently divorced and is at a very low point in his life after receiving some life altering news. He escapes to the island of St Thomas where he is reunited with long time childhood friend Koti. Koti is living on the island to escape her own demons. She reaches out to help Ian but initially he is a bit of an ass to her. He is very rude and standoffish but Koti continues to push him to get his breakthrough even though she is not aware of his specific struggle. I loved that even though it was not expected of her, she took on the responsibility of Ian’s burden because she was previously in a similar place herself.

Over time they become friends who then become lovers. It’s a no strings attached hot as hell friends with benefits relationship. I loved Ian’s dirty mouth and dominating attitude in the bedroom which is a bit of a contrast to the loving father and eventually considerate friend we get to know him to be. Koti and Ian were not only sexy together. They were also a really fun couple with great banter. Their love was breathtaking and their story will pull on your heart strings.

A huge part of my love for Ian came from the adoration he had for his daughter Ella. He was such a great father and I loved that he put her needs before his own. Unfortunately he did have a lot of baggage that prevented him from committing to Koti but I couldn’t even fault him for everything he went through. He was a beautiful man with a heart of gold but his spirit was just broken and I completely got it. I got HIM and he stole my heart!

These characters find love in each other but they also have their own personal growth. They learn to forgive and care for each other without sacrificing their own happiness. So I will go back to my first statement that this is more than just a beautiful love story. It’s so much more and highly recommended!